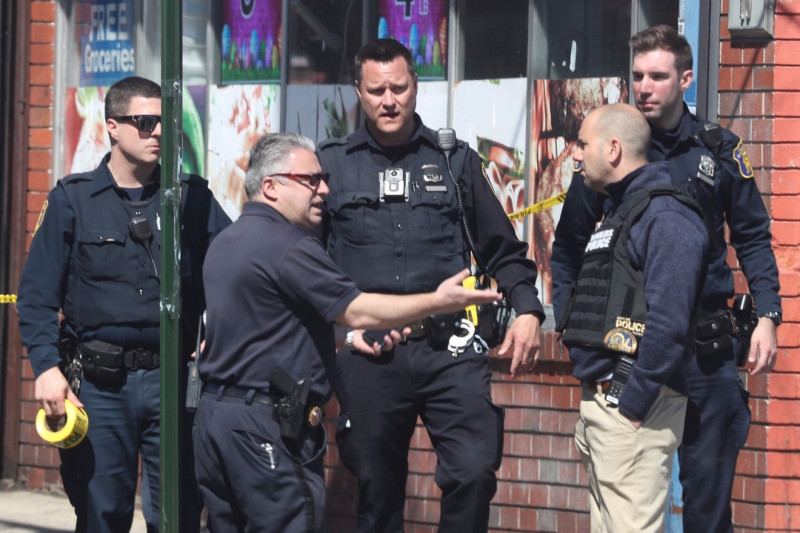 "With a week left to retirement and still going out and risking your life, it just goes show the amount of dedication and tenacity that he has," PBA president Keith Olson said.

Just a week from retirement, Menton was shot in the stomach by a suspect in an Elm Street bodega Wednesday afternoon during a firearms investigation. As he was losing blood and fast, his brother, James, an NYPD detective in the same special unit as Menton, put him in his own police vehicle and rushed him to Jacobi Medical Center, PBA head Keith Olson said.

“I wouldn’t even say probably, even the doctors said he saved his life,” Olson said.

A chaotic scene unfolded shortly after 2 p.m. Wednesday when members of the Westchester Safe Streets Task Force attempted to arrest three men, according to police. Two of the suspects went into a bodega and got into confrontation with law enforcement officials, Yonkers Police Commissioner John Mueller said Wednesday.

Olson stressed the brother’s awareness to not wait for an ambulance and to take him the 10 miles or so to Jacobi, one of the best trauma centers in the tri-state area, were crucial decisions.

Mueller said Wednesday Menton lost a lot of blood, but it appeared he was going to recover. Yonkers police said he was in serious but stable condition Wednesday evening.

Menton was a week away from retiring from the force. Olson said there was actually a small gathering planned for Menton Thursday with other members of the safe streets unit.

A larger celebration was planned for him next week, Olson said.

"With a week left to retirement and still going out and risking your life, it just goes to show the amount of dedication and tenacity that he has," Olson said.

Olson and Menton were former partners for about ten years during their careers in the Yonkers force. The two worked closely together as part of an anti-gang unit starting in 2000.

“He is the best cop that I have ever worked with," Olson said. "It's not even close to be honest."

“I can think of a dozen times when I was with Brian and things like that have happened where we just got lucky,” Olson said. “Things turned out well; nobody got shot. For him, it’s happened hundred of times.”